Most batteries have a lifespan of about 5 years, but we are getting close to upgrading our 2014 4Runner battery. This post can also be useful if you are looking for a battery upgrade for your 4Runner because you are running some aftermarket accessories. We’re going to talk about a few options for replacing an old battery or for improving the performance of your current battery.

Before you replace your battery, you should consider a few things. The most important factor is the size and location of the terminals. You will be pretty unhappy if you buy the wrong size battery or a battery with terminals in an inconvenient place. The weight of some car batteries is also a very important factor, as they can weigh up to 100 pounds. A battery that weighs too much can cause a lean; at that point, you better have adjustable coilovers to compensate for the difference.

After installing a few aftermarket accessories, the 4Runner started having trouble starting. We’ll also be installing a Smittybuilt Winch, a Baja 30″ lightbar, and a few other accessories on the 4Runner soon. Thus, it is about time to replace the OEM battery with one that can handle all these additional power-consuming accessories.

The battery has also died on me multiple times when just the headlights and foglights were on. The battery drains incredibly fast when we leave the keys in the ignition with the headlights on, but the engine isn’t running. I mean under ten minutes fast.

No matter where I go, I always carry a set of jumper cables. This also led me to buy a new battery and a jump starter in case I was stranded somewhere. Even in a parking lot, it’s hard to find someone to help you these days. 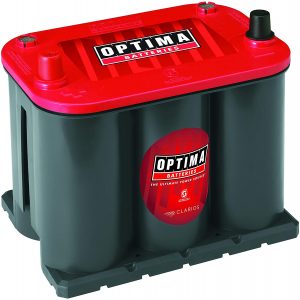 Its high power and reserve capacity, quick starting ability, leakproof design, and high amperage make it ideal for everything from hot rods to pickups to commuter cars. The material is highly durable and vibration resistant, and it can withstand being stored for long periods of time. The SpiralCell technology from Optima provides clean, strong power by using spiral-wound cells that consist of two positive and negative 99.99% lead plates that are coated precisely in lead oxide.

Weighting 31.7 pounds, it offers 720 cold-cranking amps. The Optima RedTop is a starting battery, but it also features 90 minutes of performance reserve. This battery lasts about a year before needing replacement, but there are a few complaints from consumers. Optima YellowTop batteries may be a better choice if you want to power a vehicle with a lot of electronic accessories, such as a DVD player, powered sliding doors, winches, inverters or power tools. 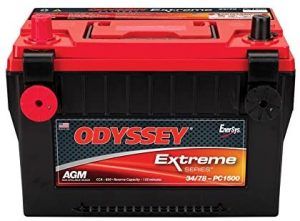 As batteries drain faster in cold weather, especially in northern climes, the Odyssey Extreme Series 34/78 – PC1500 battery is the best battery for the money. The device can operate at temperatures ranging from -40°C to 45°C (-40°F to 104°F). Odyssey’s plates are made of pure virgin lead, so it can fit more plates for a greater surface area. Power increases as a result. According to the company, this battery has twice the power and three times the life of conventional batteries, and has the highest recharge efficiency of any sealed battery on the market.

Odyssey batteries have been designed to keep up with today’s electronics-loaded vehicles. Even in cold temperatures, the Extreme Series 34/78-PC1500DT model has 850 CCA for strong starting power. It weighs 51.5 pounds, however. If weight is an issue, either for installation or just carrying more pounds around, you may want to continue reading. Odyssey 34/78-PC1500DT is best suited to vehicles with top terminals, only because consumer complaints indicate the side terminals tend to break faster over time. 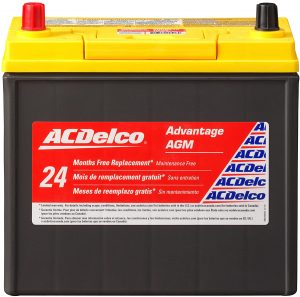 The ACDelco Gold B24R Hybrid battery features an Absorbed Glass Mat (AGM) design that enables high cycling capability for hybrid vehicles. As a result, their engines are constantly shut off and restarted. This battery’s valve-regulated gas recombinant technology provides up to three times the cycle life of conventional auto batteries. In addition, its leak-proof pressurized valve system prevents acid and dry-out damage to the terminals. The Advantage AGM series battery is specifically designed for most Toyota Prius models.

With just 325 Cold Cranking Amps (CCA), the ACDelco Gold B24R needs to be stored at a more controlled temperature. ACDELCO recommends testing your hybrid car’s battery every two months if you drive for short distances frequently or if the car will be parked for prolonged periods. Make sure that the voltage stays at 12.4 or higher to ensure that it will last as long as possible. There is a 24-month warranty included with this purchase, which may be helpful since some buyers claim the product has a short lifespan.

Antigravity Batteries’ ATX30 Lithium Ion Battery is the most powerful lightweight and compact battery on the market. It weighs just 7.81 pounds, but is rated for 970 cranking amps and 48 amp hours of power. This battery has twice the capacity of competing lithium batteries of the same size and twice the life cycle of lead acid batteries. The Antigravity battery is well suited for those who own specialized vehicles, such as heavily accessorized touring motorcycles, racing and street performance cars, and even experimental aircraft. A separate adapter is required for car terminals.

ATX30-HD models feature a lighted voltage indicator test button that simplifies checking the battery’s charge level. This battery management system (BMS) also protects the battery from overcharging and over discharging. The battery has the longest life cycle thanks to its BMS and thermal protections. Its compact size is five inches wide, 6.5 inches long, and six inches tall. Despite its unusually compact size, this unit can be mounted in any orientation in motorsports or automotive applications for maximum space conservation.

It is important to note that the XS Power D3400 battery comes out on top in terms of power output and reserve capacity, if you care about the performance of your vehicle or need to power an extensive audio system. This 12-volt battery uses the highest energy density chemistry known to AGM batteries, making it capable of delivering 4,000 watts, which is enough to charge even the speakers of A$AP Rocky. The emerald green gear motor provides a powerful rated 1,000 cranking amps at 32°F, and a charge reserve of 135 minutes. As a company, XS Power uses the services of accredited labs to make sure that their batteries are a product that can be relied on.

While the D3400 XS Series does weigh in at 48 pounds, it is capable of being mounted in almost any position. It features top M6 terminal bolts and does not come with battery posts, but you can easily remove cables from your existing battery and mount them directly to the battery. For applications requiring battery posts, these can be purchased separately if necessary.