Among today’s most popular pickup trucks in the United States, the “Chevy” Chevrolet Silverado (and its badge clone, the GMC Sierra) often competes against full-sized trucks like the Toyota Tundra and Dodge Ram. Silverado is popular among construction, plumbing, electrical, and other physical occupations because it is available in single, double, and crew cab versions.

Several families use it, however, when other types of transportation are not available, like cars or minivans. During the past weekend, I tried all of my available car seats with a few different Silverado to see what would work for 3 across car seat installations.

Follow these tips to ensure your children’s safety, no matter what vehicle you’re driving. I usually recommend rear-facing children as long as possible (until 4 or 5 like the Swedish), then a harness until they are able to use booster seats (at least 4 like the Swedish), then boosting until the 5 step test is passed (normally between age 10 and 12).

This guide was put together to help you determine which car seats will work in your Chevy Silverado if you’re serious about following these guidelines. I found out that the best car seats for a Silverado are the ones listed below. Further car seats will be added when I come across them and I have access to more Silverado. 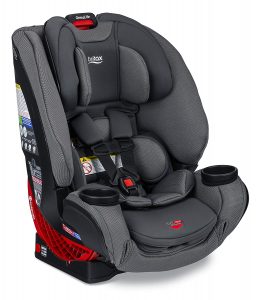 Britax’s One Life stands out for several (really impressive) reasons that make it a top choice for parents who prefer all-in-one car seats.

Convertible car seats can be used up to the end of elementary school. Using it, you can convert a rear-facing infant seat into a forward-facing five-point harness infant seat, then over time into a high-back booster seat with belt positioning. You will save money, time, and hassle of uninstalling and reinstalling multiple car seats over ten years when you buy one seat.

It is also the safest seat in its class. It’s easy to get a proper, secure installation with Britex’s patented Click Tight technology, which uses your vehicle’s seat belt and an automatic belt tensioning system.

The seat is also equipped with a steel frame, crumple zone, and a V-shaped tether to help absorb energy in case of a crash. (According to experts, more than half of car seats are improperly installed.) In addition, the sides are protected by two layers. 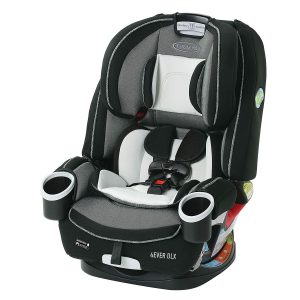 Another great feature that the chair offers is the possibility of reclining six ways, an adjustable harness with ten positions and two cup holders attached to it. 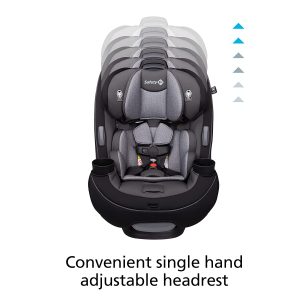 Affordable all-in-one convertible car seats are definitely available. The Grow and Go can be used as a rear-facing, forward-facing, and eventually belt-positioning booster seat. Besides having three recline positions, a cup holder, and an easily removable seat pad for washing, it has two cup holders too.

Adjust the harness and headrest in one step, and harness holders keep annoying straps from getting in the way when you’re trying to get your child out of the car seat. Parents often use this as a secondary car seat for a caregiver or grandparent’s vehicle.

Parental concern about this car seat being less high up than other brands comes from the fact that the headrest doesn’t extend quite as high. Compared with many other seats, this seat offers fewer positions to recline. It can be difficult to install Grow & Go, so you might want to watch a few video tutorials on how to install it before you start. 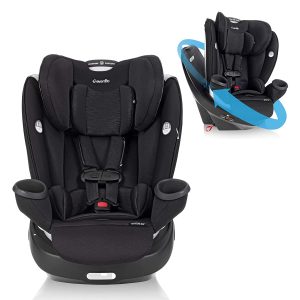 The rotating car seat, which can swivel from rear-facing to forward-facing with a simple touch of a button, is fairly common in Europe, but it has not yet been introduced in the United States. One of the first of its kind to reach the US market, the Evenflo Gold Revolve is our number one choice.

Swiveling seats are great, but why is that? There are so many things to consider. One of the things we like most about this seat is its ease of use, especially when it’s rear-facing. (The seat will swivel to the side, removing the awkward reach that is needed for standard rear-facing seats.)

The easier the setup is, the more likely it is that you will keep your child rear-facing for longer (and in a safer position). It is also great that there is no need to reinstall the seat once you wish to switch from rear-facing to forward-facing.

This product also has several other things to brag about including a foolproof installation system, premium fabrics, and a top tether anchor that can be used in both forward-facing and rear-facing modes. 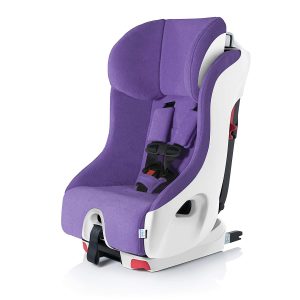 The iconic Clek Foonf convertible car seat is often referred to as “built like a tank,” and that’s exactly what parents love about it. There are a lot of safety features on the foonf. The design includes a steel and magnesium substructure, two layers of energy-absorbing foam for side impact protection, and an anti-rebound and aluminum crumple zone in the base to absorb energy in the event of a crash.

Foonf can accommodate up to 50 pounds and lasts for nine years with extended rear-facing. With LATCH or a vehicle’s seat belt, it is easily installed, and its fabrics are Green guard certified by the U.S. Green Building Council. Even so, its slimmer design allows you to fit three across in a back seat, despite its incredible features.