In sixty years, the Ford F-150 has been America’s best-selling truck lineup, with more than forty million units sold. In the lineup of engines available to customers for the F-150, the 5.0-liter V8 engine, also known as the Coyote engine, has been a popular choice.

When it comes to getting the most out of this motor, it makes sense to invest in the best tuner for the 5.0 F-150. This top choice for 5.0 F-150 programmers is going to have several benefits for the consumer.

We have compared the top choices based on power level, ease of installation, and warranty. Besides the fact that some models optimize the performance, some models also make it possible for you to see the data online in real time. You will be able to see what is happening with the engine in this feature so that you will be able to avoid any issues that may arise.

The Ford F150 is a high-standard truck that is known for its strength, quality, and speed, whether it is on a smooth road or a rough terrain.

Featuring a variety of engine configurations, its advanced technology features provide both power and safety while maintaining comfort and safety standards.

It goes without saying that, despite it being a great performing vehicle, it’s features and capabilities are limited to what Ford has to offer, specifically its engine control.

As for fuel efficiency, it would probably be possible to achieve better mileage, and shifting can be a problem. The good news is that you don’t have to settle for what is – you can change these and customize your truck’s performance through tuning. Let’s take a look at the best tuners for your 5.0 F150. 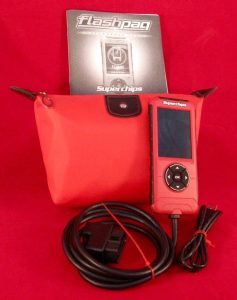 There are many different engines that you can use the Superchips tuner with, from gas to diesel. 5.0 V8 engines provide 24.4 horsepower boost and 24.6 pound-feet of torque boost with the 2011-2013 models, or use it on your 2017-2019 F-150 for an additional 13 horsepower or 15 pound-feet of torque increase. Ford SUVs, several Mustangs, and the Power stroke engine can also be equipped with the sensor.

If you adjust the gear ratio or change the tire size, you should use the speedometer correction. Alternatively, you can set the rev limit and speed limiters.

Additionally, the 2.8-inch high-definition color screen creates a seamless transition between the screen and the GUI.

Despite its average price, this engine tuner for the F-150 is a reasonable investment. Due to the fact that it also reads and clears DTCs, we believe it to be an exceptionally good value.

It will save you a lot of money each time you avoid a trip to the mechanic. A two-year warranty is offered by Superchips, which is about one year longer than most other brands. You have nothing to lose and only an added advantage, based on the customer reviews. 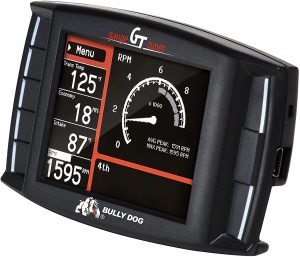 You will be able to unlock more torque and horsepower to help you meet the demanding conditions you put on your truck.

The preloaded tuning options can be used to make quick changes, or you can customize your own settings to meet your needs.

A large number of storage spots have been provided for you to save the customizations.

You can also customize the gauges that appear on this monitor so that you can observe the performance at a glance.

You will immediately know if something isn’t running correctly, and you will have time to make any adjustments necessary to protect the engine of your Ford F-150.

Additionally, this device allows users to read and clear trouble codes, making engine diagnosis simpler and more straightforward than ever before. It takes almost no time to install the software, and customers can’t seem to rave enough about the software. 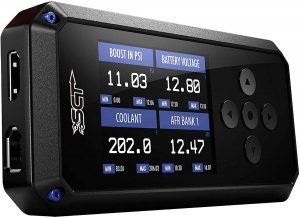 sider the SCT Performance tuner as one of the best tuners for the 2013 Ford F-150 5.0, even though you can also use it on the 2018 model, in order to cover a wide variety of models.

It has many of the same features as the last model, but it is priced considerably lower than the previous model.

In spite of the fact that the package comes preloaded with a variety of dyno-proven tune files, you are also able to add up to twenty custom tunes.

The versatility of this tool will allow you to make quick adjustments when you need to when you are on the move.

As an added bonus, you can download all your updates over Wi-Fi. In addition to being able to watch the data in real-time, you can also record it for later inspection.

There is a full-color display on the dashboard that will let you see if there is any problem with your engine. As well as being able to turn the display vertically and horizontally, you can also fit it exactly to your cabin. 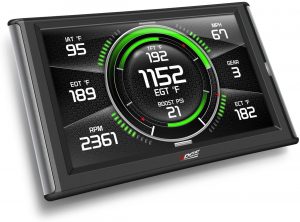 Among the high-end 2017 F-150 5.0 tuners available is this one from Edge Products. In terms of our pricing, it is on the high end of what we offer, but it is well worth the cost.

With its large 5.3-inch touchscreen, the product displays up to eight parameters. By viewing the data on the screen, you will be able to see anything that interests you.

The vehicle comes with pre-set power levels for power, towing, and fuel economy if you don’t want to modify the settings yourself.

As a consequence, you can use it to view real-time data or read and clear DTCs, among other things. As part of the device, you can also install a custom dash mount from Edge, a pyrometer from EGT, and other accessories.

If you want, you can also use the video-in port to connect your backup camera or DVD player for additional functionality.

This device is not considered to be a difficult device to install based on the reviews. The installation does not require the use of special tools or a high level of expertise.

Connect the machine into the truck’s OBDII port and you will be given the instructions on how to do it. A one-year warranty is included with the purchase.

Which means you can protect your investment during that time. By using this easy to install and configure tuner you can take towing and hauling to a whole new level.

A quick, easy, and powerful Performance Tuner for Diablo Sport’s Predator P2 Platinum is now available! It is one of the best tuners that is available for the 5.0 Ford F-150, as it provides a high-grade boost to your truck by using its palm-sized device.

Thanks to its 2.8″ high definition color screen, 5-button interface, improved memory, and faster processor, tuning and adjustments are just a few clicks away. California is one of the few states that do not allow this device.